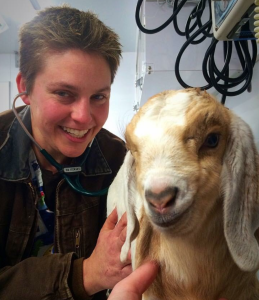 Dr. Heather Stewart grew up in Manhattan, NY; Oakland, NJ; and Santa Barbara, CA. She grew up with so many animals, ranging from your typical cats and dogs to horses and sheep and chickens and rats. Heather’s grandfather was a human doctor, her grandmother an RN, and her mom and RN, so the medical field was apparently a genetic thing. It seemed logical to go into the veterinary field, combining the medical interest with her love of animals.

After high school in Santa Barbara, she attended Rice University in Houston, TX and graduated in 1997 with B.A.s in both Biology and German. She then worked in the Boston area for a few years before attending the University of Pennsylvania School of Veterinary Medicine in Philadelphia. She graduated in 2003 as a Veterinary Medical Doctor (VMD). (This is of equal status to the more common “D.V.M.” degree, but U Penn wanted to acknowledge the fact that the vet school was based on the human medical school and not on an agricultural school, so they kept the “MD” part.)

Dr. Heather first started working as an equine vet exclusively, but then started working at a small animal clinic to expand her knowledge of dogs, cats, and exotic animals. She also has been doing some work at PAWS Wildlife Center, helping to take care of injured wildlife.

Dr. Stewart’s favorite thing about veterinary medicine is the great variety of creatures she gets to treat, and being able to help both animals and humans in the process. She enjoys being able to see all of these animals on their home turf in this mobile practice. She has many pets of her own, including dogs, cats, blue-tongued skink, leopard gecko, bird, horses, goats, sheep, pet cow and pet steer. It’s quite a zoo!

In 2006, Dr. Stewart completed her PennHIP certification. PennHIP (The University of Pennsylvania Hip Improvement Program), is a great tool for evaluating canine and feline hips for hip dysplasia. It is a much more accurate way to evaluate than the OFA technique, and puppies can be evaluated as early as 6 months of age. Please talk to us about having your dog (or cat) evaluated. Unfortunately, our x-ray equipment is insufficient for PennHIP at this time, so we will be unable to take PennHIP radiographs for a while. See the above link for veterinary hospitals in our area that can take care of you.

Dr. Heather became a certified veterinary acupuncturist via the Chi Institute in May 2015 and completed training for Tui-Na there as well in February 2017. She also works to better integrate Western and Chinese herbal therapies into practice.

Dr. Heather dedicates this business to her father, Don Stewart, who passed away in January 2006 from lung cancer and aplastic anemia. Without his help, she would never have been able to take the chance and try to run this mixed animal mobile practice. He will be missed always. Not to be left out, though, Heather’s mother, Sue Stewart, who is motivational in her work-ethic and positive attitude. She is a practicing RN in Rhode Island and has been a tremendous help to Carousel Vet over the years.

Font Resize
Contrast
Accessibility by WAH
Call Us Text Us